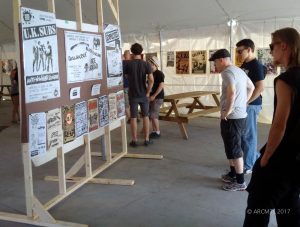 On July 28, 2017, ARCMTL mounted a poster art exhibit in collaboration with Greenland during their 77 Montreal punk music festival.

Held outdoors on a beautiful mid-summer day on Parc Jean-Drapeau, this was the first edition of this punk festival. The Montreal punk scene has for many years been known as being particularly nostalgic, with many fans of old-school punk, including bands from the early days of punk in 1977. Among the older bands set to play the festival were Los Angeles’ X and Montreal’s Genetic Control and Kingpins.

ARCMTL’s poster exhibit was presented in the punk village of tents set up at this festival, covering the walls alongside various local punk record store kiosks. Nearby was a tent exhibit put on by ARCMTL partner organization the Musée du Rock and Roll du Québec, as well as a movie tent where documentary films about early punk played all day, providing a cool shady place to take a break from the hot sun. 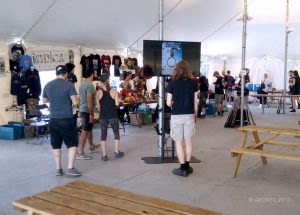 ARCMTL selected posters from its collections as well as from various local artists and collectors to cover the era from the early days to the early 1990s. Greenland covered a wall of their own punk concert posters starting from the early 1990s when they began putting on shows.

The exhibit showed how incredible the early punk and hardcore scene was in Montreal, starting with the late 1970s in Old Montreal venues such as 364 St. Paul and the Hotel Nelson. Early punk acts from out of town such as the Viletones inspired locals such as the Normals, the 222s and the Electric Vomit to kick-start our own scene. 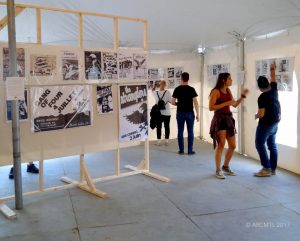 By the early 80s, more and more local bands doing straight up punk, post-punk and the emerging hardcore and thrash sounds settled in for a few years for shows at such busy venues as the Rising Sun, Station 10, Le Cargo and Foufounes Electriques. By 1985 the scene was exploding, and it’s never fully died out since then. By the time the 1990s came around, a second generation of local punk and hardcore bands carried the tradition forward.
ARCMTL would like to thank the following artists and collectors for material provided this exhibit: Janou Fleury, Rick Trembles, Patrick Hutchison, Yaffa Elling and especially the late Bryan Damaged (O’Connor) R.I.P.

Feel free to comment on the posters in this gallery. For more information about ARCMTL, its projects, or how you can donate or lend your own Montreal punk artefacts for its archives, you can contact us by email at archivemontreal@archivemontreal.org . 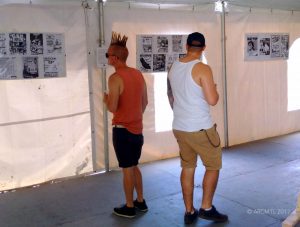 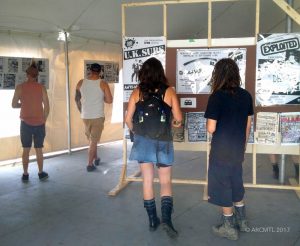