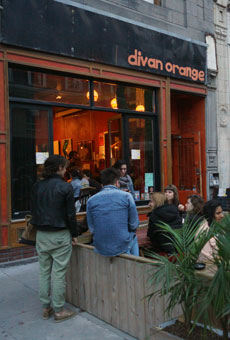 Le Divan Orange is a co-operative cultural space, opened in 2004 by a collective of people who had previously been involved in the co-op Café Utopique that operated in the 2000s on Ste-Catherine near Berri (now L’Escalier.) Occupying a large shoebox type ground floor that housed a few different bars since the 80s, prior to which it had been a retail location. The name was chosen from the orange divan