Archive Montreal has been gathering up and archiving local concert posters and flyers since it was founded in late 1998. For the most part, posters and flyers are acquired not long after they have served their main purpose of promoting a specific event, exhibit, demonstration or social cause. Staff and friends of ARCMTL regularly take down such posters from the walls of cafés, record stores, store entrances—or even from the streets—and pass them on to the archive.

However, most of the posters dating from before 1998 held in our archives come from donations or loans from individuals. These are typically people who were in the habit of preserving such posters themselves over the course of their time attending concerts, cultural events or promoting social causes in Montreal. Some are music or art collectors; others were active in hosting events themselves over the years, or else they worked in a book or record store where these materials were distributed.

Archive Montreal has rescued quite a few such collections from recycling bins after these individuals decide they had hung onto them for long enough. Sometimes such collectors loan their collections of posters and flyers to Archive Montreal temporarily so that they can be properly digitized. Digital versions of such private collections are then stored in Archive Montreal’s digital collections, available for consultation on-site or for eventual use in projects such as documentaries, reissues or anthologies. Care is taken to document any known information about the copyright holders in the case of posters designed, printed or clearly signed by an artist. In those cases, permission from the copyright holder is obtained before any high-resolution images are released from the archives.

The growing poster collection has become a valuable resource for all sorts of research into local culture, cultural spaces, performers, artists, designers and social causes from the 1960s to today. It also is used by Archive Montreal itself to accompany blog posts, virtual exhibits or podcasts for its weekly Montreal Sound Ark radio show (which broadcasts music from the archive every Friday afternoon on CKUT 90.3 FM).

Original posters or reproductions from the digital copies are also included in various physical exhibits of posters and printed art curated by Archive Montreal throughout the year, and such material is also lent regularly to other organizations, festivals or museums for use in their exhibits. Archive Montreal aims to seize opportunities for the material from its archives to get out and be seen, be discovered and be enjoyed by the wider public, all while respecting the primary goal of preserving often unique or very rare ephemeral material from Montreal’s cultural history.

Here are some photos of resident Archive Montreal archivist Brian Meagher unpacking and treating a significant collection of posters lent to us in December, 2015 by a longtime Montreal music fan. 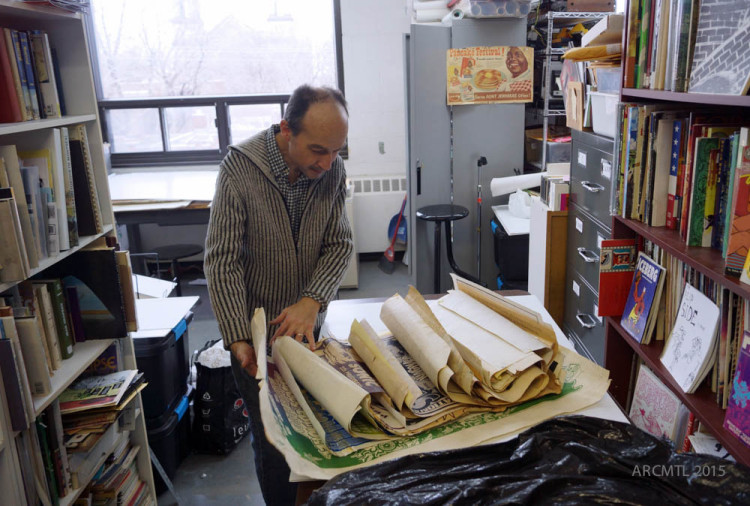 The first step, not seen in the photos, was to arrange a pickup of the sizeable poster collection from the collector. A vehicle was borrowed and a visit was arranged to the collector’s home, where the posters had mainly been stored in several plastic bags kept in a trunk, from which posters were mainly used to re-decorate the person’s home from time to time. The initial challenge is to transport them to the archive centre safely and once there, setting up a workspace to begin removing the posters for triage. 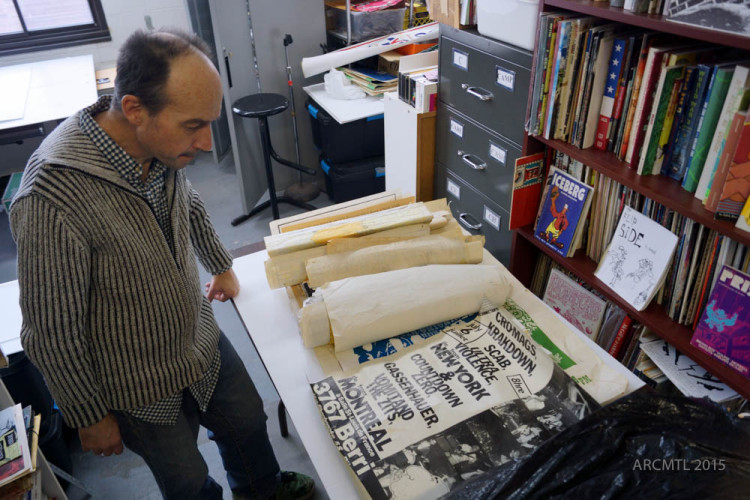 It’s important to have enough free table space to be able to treat a collection without having any of it get mixed up with the many other specific collections stored or being treated at the archive. 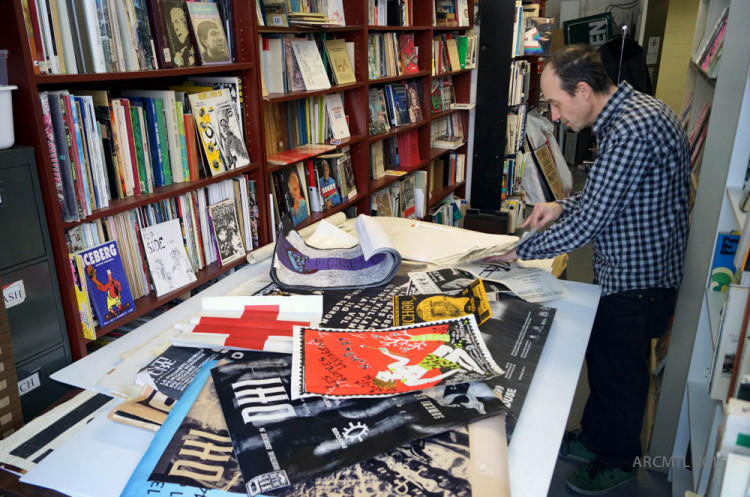 The next challenge is the safe separation of posters that have gotten stuck together, a very common problem given that expired posters removed from walls very often end up with some adhesive or tape still stuck to the back. Temporary (green) painter’s tape is often used to cover over any adhesive that cannot be easily removed without ripping a poster. 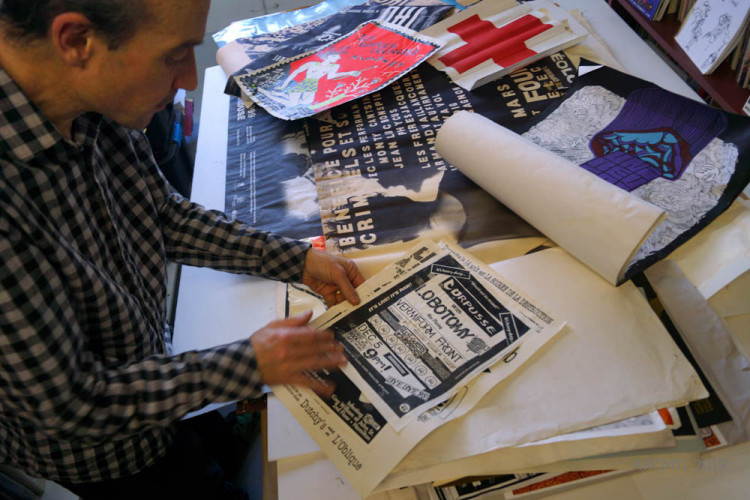 The next level of sorting involves dividing the posters by size: the very large ones are stacked together, likewise medium and smaller sizes get their own stacks. 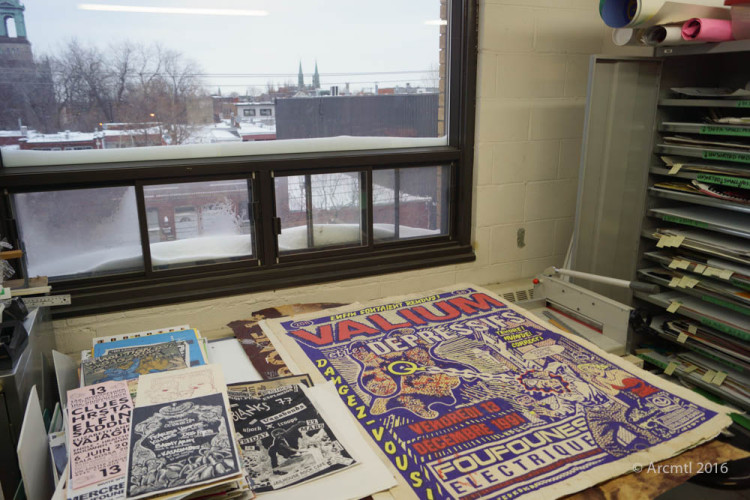 Also, it is important to segregate posters that are in particularly torn or damaged condition or which may have mold that can spread to other posters. (Some posters are removed from the streets where they may have been stuck to walls or posts with wheat paste, which can leave organic matter that attracts mold over the years.) 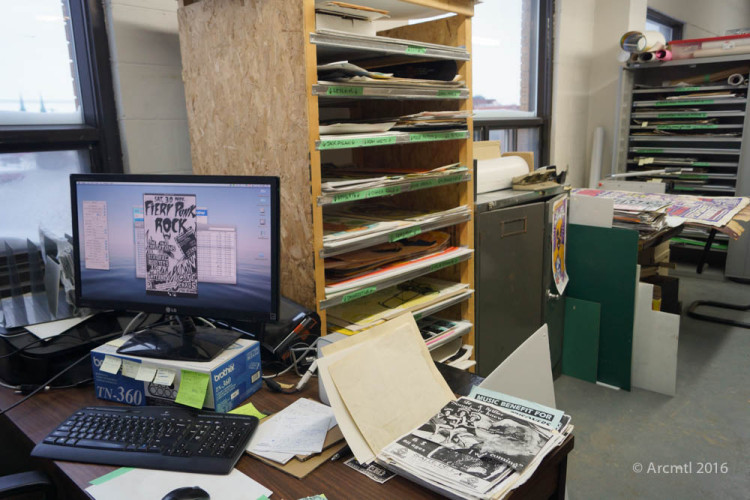 Most of the medium and smaller sized posters as well as flyers will be further sorted into piles of black and white or colour graphics. These can later be batch-digitized using the appropriate settings for colour scanning or black and white or greyscale scanning. 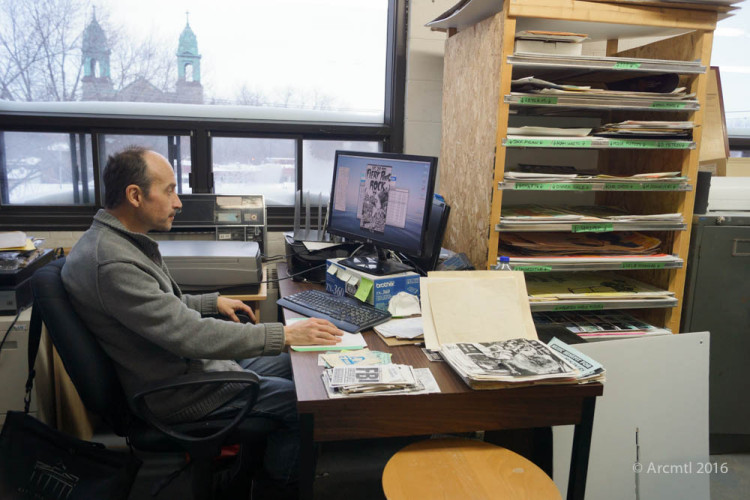 Seen here is a shelving unit used for temporary storage and triage of posters. Once organized, each sub-collection of posters finds its own spot on a shelf in one of several permanent metal cabinet poster lockers at the archive centre. 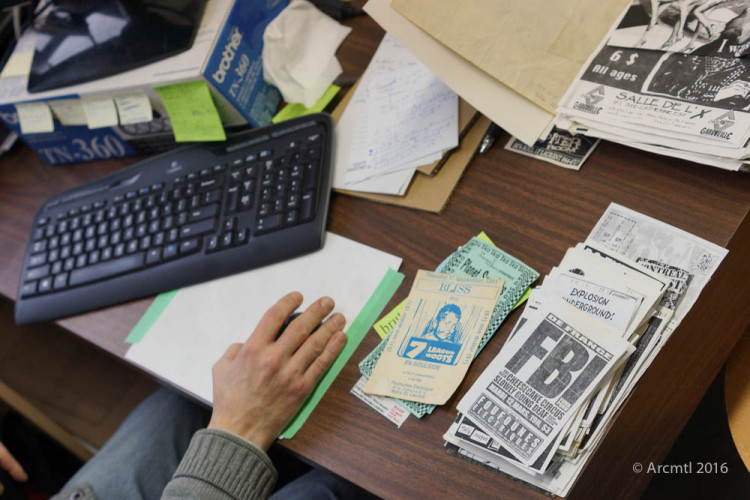 This particular collection was accumulated over more than 20 years. At more than 200 distinct items, it provides a very good sample of posters for concerts held at small and medium sized concert venues in Montreal hosting ska, punk, hardcore, industrial or heavy metal concerts from roughly 1980 to 2002.
Despite already having many hundreds of posters and flyers from that era in our collections, most of this donation was new to the archive. The fact is that so many thousands of posters and flyers are created to promote events every year in Montreal that only a small sampling of them ends up being preserved. The word “ephemeral” does, after all, mean something that exists for a short time. It can be a challenge to locate such material from ten, twenty or more years ago, and so a donation or loan of a collection of this kind can be very important to fill in gaps in our archives.
Before a collection is ready to be digitized, the archivist will have already labeled each poster or flyer discreetly in pencil, set aside duplicates, set aside items already held in our archives, and set apart those that require conservation or restoration. In this case, folders of small black and white posters are being catalogued on the computer. 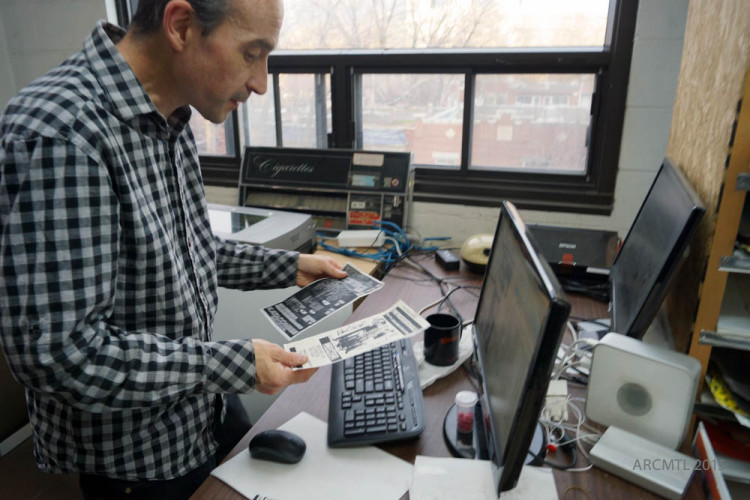 A selection of posters promoting concerts at the Jailhouse Rock Café, an important Montreal concert venue active through the 1990s, are seen here being scanned. 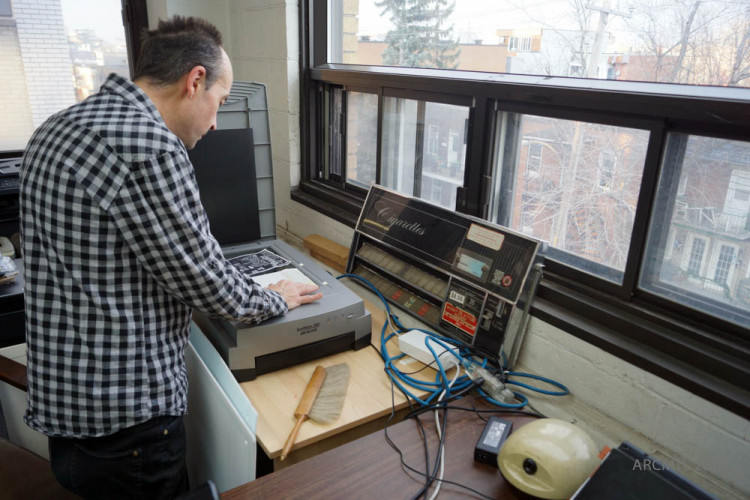 Once a poster has been physically treated and filed, there remains a lot of work to do to process its digital version. In order to be able to find a specific poster quickly among the thousands that have been digitized, it’s important to include as much information about each one in an entry in the archive’s database. Most of the textual info from the poster is noted: poster artist (where indicated), event description, bands played, name of venue, location, dates. Very often, posters don’t indicate the year they were produced, only the day and month of whatever they are promoting. We can usually quickly deduce the date if the day of the week is indicated along with the numerical date. If not, the many publications held in Archive Montreal’s collections that feature concert and event listings through the 1970s-80s-90s-00s, such as the Montreal Mirror or Voir, can be consulted. 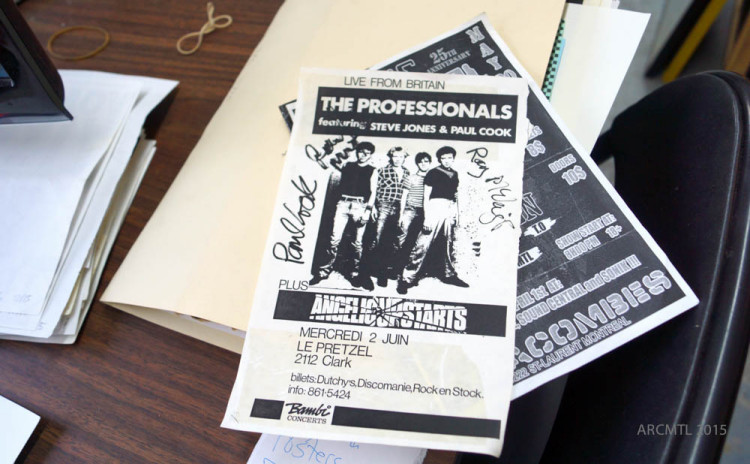 Once completed, Archive Montreal is going to pass along digital copies of the specific posters seen here to the venue’s former co-owner and manager, Domenic Castelli, for a book compiling posters and stories about the venue that he is planning for the spring of 2016. 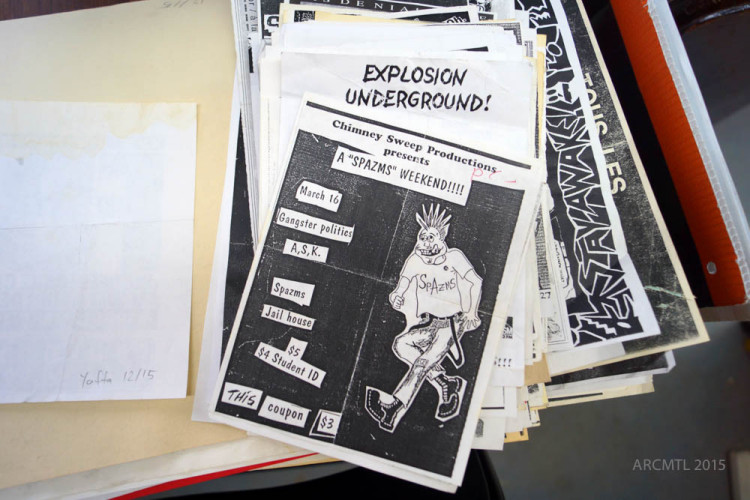 Click here to view a larger web gallery of poster scans from the Jailhouse Rock Café.

Although concert posters are not normally considered proper works of printed art, many print artists (and other visual artists) subsidize their art with contracts for event posters. Many event posters in Archive Montreal’s poster collections are by artists who also have proper art prints in our archive. Here are some recent works by prolific poster artist breeree. : 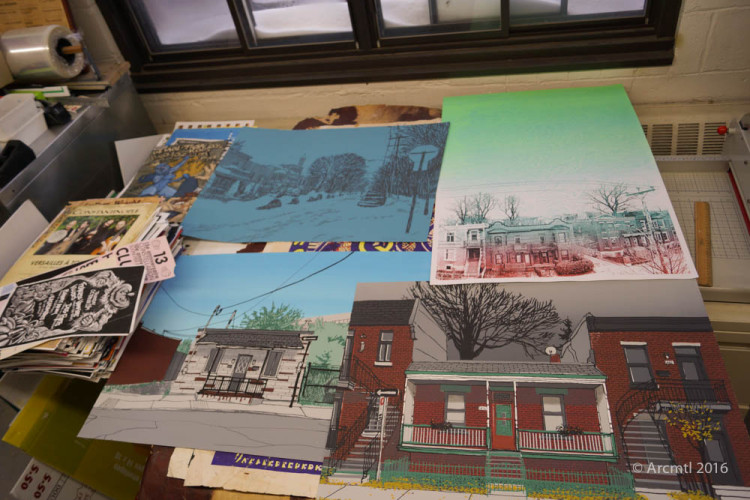 And a set of two art prints featuring a fictionalized Montreal landscape by Jason Cantoro at Sérigraphie Cinqunquatre: 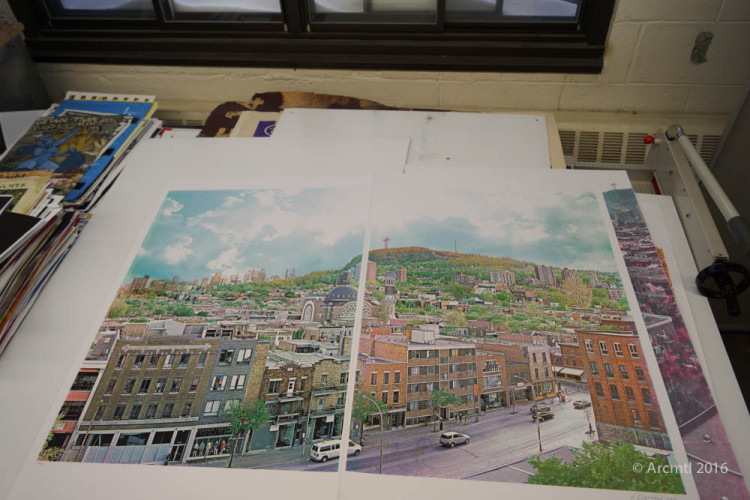 If you or anyone you know has event posters, flyers or other local ephemera they no longer need, you can contact Archive Montreal by email at archivemontreal@archivemontreal.org.